Welcome to the Back Bay Scratchers' official website... almost. Check back soon for a full site. In the meantime, enjoy some basics! 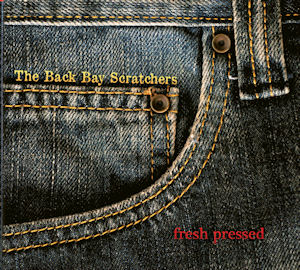 September 30, 2012 - The Back Bay Scratchers' debut album, "Fresh Pressed", was released at a sold-out show on September 29. The 12-track melange of original compositions and new arrangements on tried-and-true favourites is now available in stores and through the band. More information about the album will be up shortly, but for now:

HOW TO BUY THE ALBUM:

We have a music video?!

June 7, 2012 - The Back Bay Scratchers recently took part in the 48-Hour Music Video Competition presented by Western Arctic Moving Pictures. The Band was paired with filming duo Jeromy Deleff and Samantha Hefford. The team had less than 48 hours to complete the planning, propping, filming, editing and rendering of a full music video. Needless to say we are thrilled with the outcome, and grateful to Jeromy and Samantha for a excellent video. Watch for yourself:

Like so many northern bands, the Back Bay Scratchers were born one cold night in a shack down in Yellowknife's Woodyard. They mix bluegrass, old time, swing, celtic, and hints of country to create a fresh folk sound. Interesting instrumentation and memorable melodies draw audiences and fans into their toe-tapping tunes.

BBS playing at the Snowking's Royal Ball in 2011

Miranda Currie begged her parents for the opportunity to play violin at age seven, and discovered fiddle music at sixteen. She later studied violin and voice at university, where she also discovered her love of songwriting.

Claire Marchildon began playing Suzuki violin at the age of four. It wasn't until university that she developed her love of the fiddle, playing at a local coffee house.

Ryan McCord played piano and recorder from a young age into his early teens. In his mid-twenties, he rediscovered his love of music after picking up a guitar once again. He's perhaps most famous for his rad Strad kazoo.

Ben Russo grew up with music. He received his first guitar when he was in his early teens. Since then, Ben has been busting out wierd and wonderful chords on the guitar and mandolin.